This is Week 11 of the Friday Facts’ focus on the coronavirus pandemic across the nation and in Georgia. View previous editions here. View the Foundation’s near-term proposals here. Share your ideas: Email us at info@georgiapolicy.org. 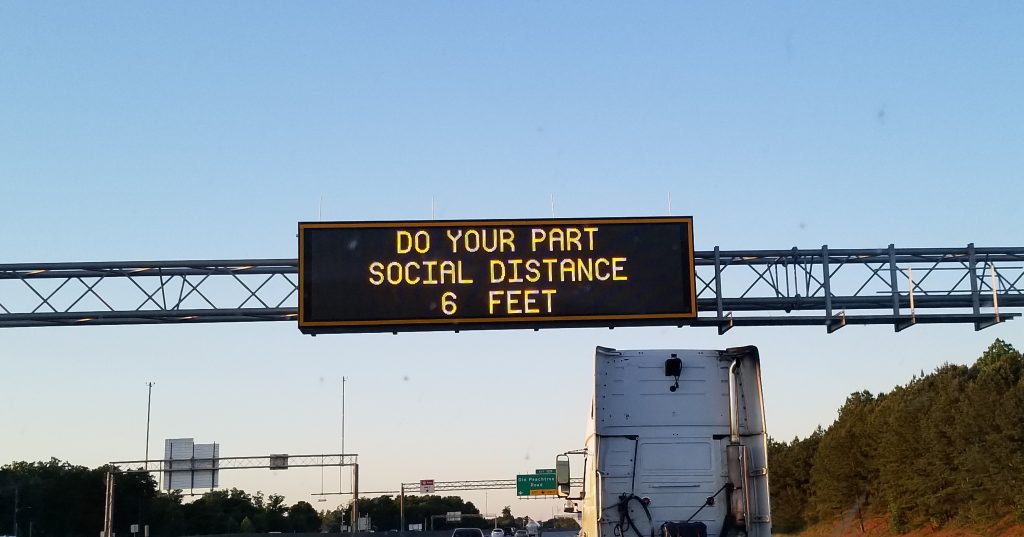 While the roads across the state have been a little less traveled, the Georgia Department of Transportation has put its overhead signs to good use during the pandemic.

“It is rather tiring having to point this out as often as we do, but it remains the case that people who are born today have it considerably better than anyone has ever had it in the history of the world – especially if they are born in America or Britain or Australia or Western Europe.” – Charles W. Cooke

“The biggest casualty from the COVID-19 pandemic has nothing to do with the disease. It’s the power we’ve given to politicians and bureaucrats. The question is how we recover our freedoms.” – Walter Williams

“We should never despair, our Situation before has been unpromising and has changed for the better, so I trust, it will again. If new difficulties arise, we must only put forth new Exertions and proportion our Efforts to the exigency of the times.” – George Washington, 1777

Policy proposals: The Foundation proposed a series of policies for near-term relief during the pandemic, as well as principles to guide and oversee policy reforms and an Issue Analysis tackling fiscal policy considerations for Georgia. Additionally there are several commentaries from Senior Fellows on fiscal opportunities, school choice and education funding.

Shutdowns: In a 36-page executive order issued Thursday and effective through June 15, Gov. Brian Kemp announced measures allowing more Georgia businesses to reopen. Beginning June 1, restrictions on restaurants are relaxed and bars may open if they abide by a list of 39 rules. Amusement parks, water parks and traveling carnivals may open June 12 and must abide by 33 rules. The public health state of emergency continues until June 12.

Guidance: The Atlanta-based Centers for Disease Control and Prevention has posted a 60-page document to its website providing guidance on how to reopen the nation from pandemic-related restrictions.

Back to school: A USA TODAY/Ipsos poll released this week found 1 in 5 teachers surveyed say they are unlikely to go back to school if their classrooms reopen in the fall. A separate poll of parents with at least one child in grades K-12 finds that 6 in 10 say they would be likely to pursue at-home learning options instead of sending back their children this fall. Nearly a third of parents, 30%, say they are “very likely” to do so.

Aftermath: Only 46% of small business owners say that resources designed to help them deal with the pandemic were actually useful, but 68% are confident they will recover from losses caused by the pandemic, according to a new Verizon Business survey. Respondents identified the top three steps they will take when the outbreak has subsided:
Improve cleaning protocols for office or retail spaces    74%

Delayed: A Kaiser Family Foundation poll found 48% Americans surveyed said they or someone in their household postponed or skipped medical care due to the pandemic. The phone surveys conducted May 13-18 also found that as restrictions ease, 68% of those who delayed care expect to receive that care over the next three months.

Delivery: A new analysis by WalletHub compared the 50 states across 14 unique metrics to determine the states with the best health infrastructure to deal with the pandemic. Best in the nation was North Dakota; worst was Connecticut. Georgia was No. 34. Metrics included beds per capita, number of uninsured and public health emergency funding per capita.

Innovation: Among the innovations aimed at combating the virus is a temperature-monitoring patch that could help track employees as they head back to work. The Band-Aid-sized patch is intended to be worn on the skin and connected wirelessly to a mobile device to monitor a person’s body temperature, Reuters reports.

Relaxed: Americans for Tax Reform has compiled a list of the 570 regulations suspended by federal, state and local governments for the duration of the pandemic. As Reason magazine’s J.D. Tuccille points out, “Many rules that served as tedious bureaucratic obstructionism in good times were quickly revealed as dangerous and potentially deadly during a crisis and tossed aside. And that’s where those rules should remain after the pandemic is gone⁠ – on the garbage heap of failed authoritarian policy.”

Burdensome: The Competitive Enterprise Institute’s released its 2020 edition of Ten Thousand Commandments this week, and the picture of the federal regulatory state is not pretty. In total, federal regulations cost an estimated $1.9 trillion per year, a “hidden tax” greater than corporate and personal income tax revenues combined. While agencies published 2,964 new final regulations in 2019 – the first year with fewer than 3,000 since record-keeping began in 1976 – they also listed 3,752 upcoming rules in the most recent twice-yearly Unified Agenda.

Easing burden: Speaking at a Competitive Enterprise Institute forum this week, Secretary of Labor Eugene Scalia said his department is working to reduce regulatory burdens, as President Trump has ordered. One rule change, expected to save businesses $3.2 billion over 10 years, would allow employers to email retirement plan statements instead of mailing hard copies. Another would allow bonuses for employees who work hours that fluctuate from week to week from receiving a bonus. Scalia also said occupational licensing restrictions have become a problem, with “probably a tripling in the occupations that require licenses over the last 30 years or so.”

This month in the archives: In May five years ago, the Foundation published, “The Concrete Road Less Traveled.” It noted, “To its credit, the concrete paving industry is not seeking preferential treatment. In the truest sense, it’s seeking a level playing field. Life cycle analysis will provide transparency; the process will bring more concrete contractors to the state, in turn raising the level of competition and further lowering the cost of both types of pavements.”