January 28, 2020: The Georgia Public Policy Foundation celebrates 29 years of policy over politics with an Anniversary Celebration and Freedom Award Dinner in the Egyptian Ballroom at the fabulous Fox Theatre on Tuesday, January 28! The keynote speaker is John A. Allison, retired CEO of BB&T and the Cato Institute. The Foundation’s prestigious Freedom Award will be presented to Sunny K. Park. Find more information here; contact Kennedy@georgiapolicy.org for sponsorship information.

We’re hiring: The Foundation is in search of a Policy and Research Director to work with the President and Vice President to set policy positions and priorities among our issues, which include education, healthcare, transportation, tax and spending, regulation, housing affordability, criminal justice reform, and energy and the environment. Find out more at talentmarket.org/policy-gppf/.

Christmas gift? Almost every week of the year, the Friday Facts newsletter is distributed to thousands of readers across the state. At the very bottom we note, “If you enjoy the FRIDAY FACTS, please consider making a tax-deductible contribution to help advance our important mission by clicking here.” The Foundation neither accepts nor solicits government (taxpayer) funding. As 2020 draws to a close, we hope you will add us to your gift list, and share the gift of the Friday Facts with your friends. Encourage friends and family to sign up today for the Friday Facts: https://bit.ly/2YnDdl2.

“The plaintiffs’ argument that the [Affordable Care Act’s] individual mandate is unconstitutional without the tax penalty. I think that’s compelling because a prior Supreme Court decision went to great lengths to try to save the individual mandate from otherwise being unconstitutional by characterizing it as a tax. One of the features of a tax is that it generates revenue for the federal government. If you decrease that penalty to zero, obviously you are not generating any revenue for the government. I do think it’s hard to construe that to be a tax.” – David Pate, MD, president and CEO of St. Luke’s Health System in Boise, Idaho

“How many observe Christ’s birth-day! How few, his precepts! O! ’tis easier to keep Holidays than Commandments.” – Benjamin Franklin

Millennial matters: The millennial generation (generally, those born between 1982 and 2000) might not have the same opportunity that previous generations had to fare better economically than their parents, the Government Accountability Office reports, citing recent studies. The studies reviewed found that over the past 40 years, fewer Americans are making more than their parents did at the same age; that millennials have significantly more student debt, lower levels of homeownership, and less net worth than previous generations; and that “while millennials are highly educated, it’s not clear whether this will boost their income in the long run.” 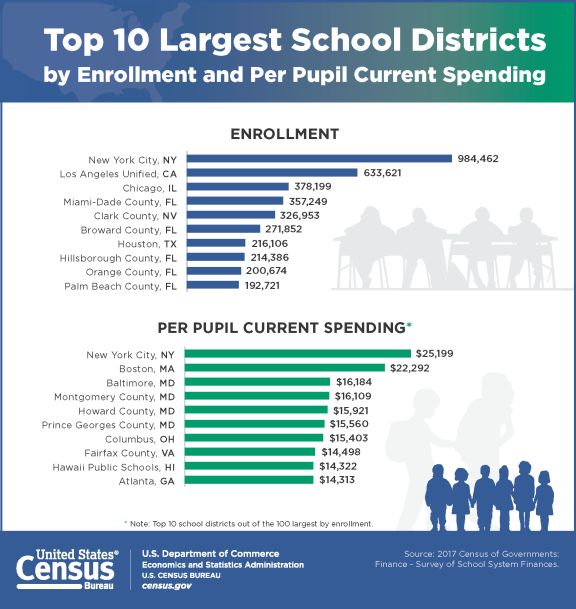 Knowledge crisis: Just 18% of colleges and universities require students to take a course in American government or history. That may be why a survey by the American Council of Trustees and Alumni (ACTA) found that 15% of college graduates believe Brett Kavanaugh is the Chief Justice of the U.S. Supreme Court; 16% believe the late Antonin Scalia is the Chief Justice and 18% of Americans believe Alexandria Ocasio-Cortez is the architect of the New Deal. Test your civic knowledge here.

Enrollment: From October 2011 to October 2018, the total number of people enrolled at all levels of school declined by 2.2 million to 76.8 million people, according to U.S. Census Bureau data. Over the same period, the number of students in graduate and professional schools increased by 307,000 to 4 million. According to the Centers for Disease Control and Prevention, 2018 was the fourth consecutive year of declining births in the nation.

Spending: Per-pupil spending averaged $12,202 in Fiscal Year 2017, a 3.7% increase from 2016, according to the Census Bureau. In Georgia, the data show, 2017 education spending totaled almost $18 billion. Just over $11 billion was spent on salaries and benefits for instruction and almost $6 billion spent on “support services.” Another $1 billion was spent on “all other functions.” In a 2017 report, Senior Fellow Ben Scafidi argued K-12 education spending in Georgia is underreported and “missing billions.”

Mandate: A federal appeals court panel in New Orleans agreed with a lower-court judge that the portion of the Affordable Care Act mandating health care coverage is unconstitutional now that Congress has eliminated the tax penalty intended to enforce it. The court sent the case back to the lower court to decide how much of the rest of the ACA can stand in light of that ruling. The Texas-led coalition of 20 states, including Georgia, had argued that the mandate was unconstitutional and the rest of the law should fall, too. Source: Kaiser Health News

Fat chance: A new study in the New England Journal of Medicine predicts that nearly half of Americans will be obese by 2030. Nearly 52% of Georgians will be obese, it estimates, with 26.6% having “severe obesity.” Source: CNN.com

Rankings: The U.S. Department of Veteran Affairs (VA) is discontinuing its star rating system for facilities, making it easier for veterans to compare VA facilities with non-VA facilities in their local area. “Star ratings were developed as an internal tool meant to compare one VA facility to another,” said VA Secretary Robert Wilkie. “These ratings do not provide insight as to how our hospitals stack up against nearby non-VA facilities and are therefore of little value in helping veterans make informed healthcare decisions.”

Spending: In 2019, Americans are projected to spend up to $730 billion over the Christmas holidays, according to the National Retail Federation, with spending, on average, at $1,047.83 per consumer.

Enjoying: Atlanta is the best place in the nation to spend Christmas, according to WalletHub’s ranking of 100 cities, based on 33 key indicators of a festive and affordable Christmas, such as traditions, shopping and costs. Hialeah, Fla., is at the bottom of the list.

This month in the archives: In December 10 years ago, the Foundation published, “Five Ways Technology Can Transform Transportation.” It noted, “The mantra is that you can’t build your way out of congestion. Capacity is one need, but clearly, with the advantages of the information age, technology has a huge role in paving the way to congestion relief.”

Have a great weekend and a Merry Christmas!