November 15: Early Bird registration is $75 through September 20 for the 2019 Georgia Legislative Policy Forum. The agenda is online for the daylong event on Friday, November 15, at the Renaissance Atlanta Waverly. The theme: “Wisdom, Justice, Mobility.” Register here.

“One of the hallmarks of bureaucracy is a regulatory hodgepodge, requiring armies of expensive experts to untangle. Central planning can never match the free market’s efficiency, so bureaucrats continuously tinker, trying to attain regulatory perfection. It never works.” – Seema Verma

“In Georgia, 489,000 individuals are required to get a license from the state to be allowed to work. These individuals must navigate 178 license types, 41 boards, and a code consisting of 768 different provisions. … The Georgians First Commission is dedicated to removing barriers to economic prosperity so that more Georgians can enjoy the freedom and self-value of a hard day’s work.” – Scott Hilton, Georgians First Commission

“Presuming that some students or parents are such passive victims of circumstance that it’s unfair to expect them to be responsible for their actions is to deny these individuals their agency, and to strip them of their dignity.” – Frederick Hess 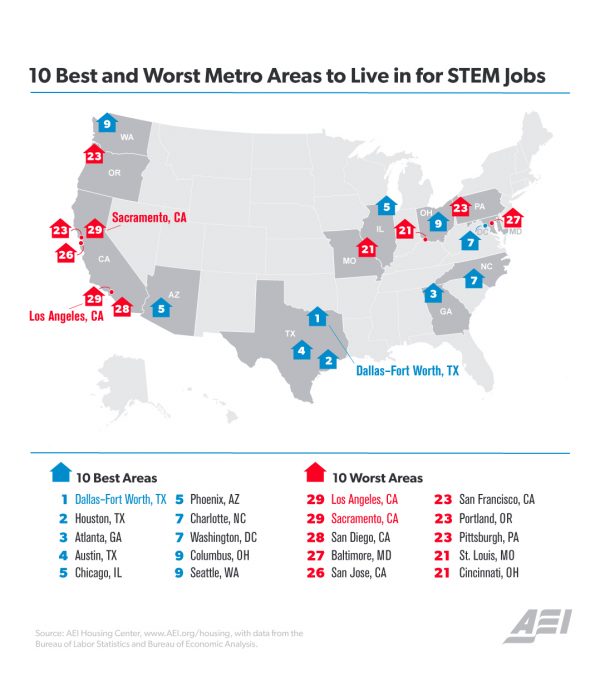 overty: The official U.S. poverty rate in 2018 was 11.8%, the fourth consecutive annual decline in poverty. Since 2014, the poverty rate has fallen 3 percentage points. In 2018, for the first time in 11 years, the poverty rate was significantly lower than 2007, the year before the most recent recession. By the numbers, there were 38.1 million people in poverty, about 1.4 million fewer people than 2017. The improving economy was a key factor in the decline, the U.S. Census Bureau noted in its annual report on income and poverty.

Stay-at-home workers: In 2017, some 5.3% of adults in large metro areas worked from home, a rough proxy for remote workers. That was up from 3.7% a decade earlier, according to The Wall Street Journal, which found that people who do their jobs from home, freelance or constantly travel for work are migrating away from expensive urban centers toward cheaper cities.

By the numbers: Atlanta is No. 3 on the American Enterprise Institute’s Housing Center list of 10 best metro areas to live in for science, technology, engineering and math (STEM) jobs. Texas leads with three of the top five spots: No. 1 is Dallas-Fort Worth, No. 2 is Houston and No. 4 is Austin.

Labor laws I: In 2016 Oregon passed one of the country’s most aggressive minimum-wage laws. By 2022, the hourly minimum wage will be $14.75 in Portland. To reduce costs, stores are opening self-checkout stations. Now the Oregon AFL-CIO wants voters to approve limiting grocery stores to no more than two self-service checkout stations at a time. Violators would pay hefty fines. Source: Wall Street Journal

Labor laws II: The past decade has seen an unprecedented sweep of pro-worker and economy-boosting public sector labor reforms across several states, the Commonwealth Foundation notes in “Worker Freedom in The States.” Commonwealth assessed state labor laws on 11 policy measures that affect taxpayers and individual workers, and placed Georgia among the seven states that earned an A-plus grade.

VA must pay ER claims: A federal appeals court has ordered the U.S. Department of Veterans Affairs to pay for emergency care provided to veterans at non-VA facilities. The U.S. Court of Appeals for Veterans Claims ruling applies to claims filed between 2016 and 2025. The VA’s Office of Inspector General estimated in August that tens of thousands of veterans had their ER claims inappropriately denied or rejected. Source: Becker’s Hospital Review

E-cigarettes: President Donald Trump said this week he will seek to ban the sale of flavored vaping products in an effort to get young people to give up e-cigarettes. In other news, the New England Journal of Medicine reports a British study found “E-cigarettes were more effective for smoking cessation than nicotine-replacement therapy, when both products were accompanied by behavioral support.”

Low pain threshold? Americans and Canadians are seven times more likely to fill a prescription for opioid pain pills in the week after surgery than Swedes, according to a study published this week. It found more than 75% of the North Americans filled a prescription for opioids following four common surgeries, compared with 11% of Swedes, and Americans also received the highest doses of opioids. Source: KevinMD.com

Medicare fraud for all: The owner and CEO of a telemedicine company pleaded guilty for his role in a $424 million fraud scheme, part of one of the largest healthcare scams ever prosecuted by the Department of Justice. Lester Stockett, owner of the Video Doctor Network and CEO of AffordADoc, admitted that he and others agreed to solicit and receive illegal kickbacks and bribes in exchange for arranging for physicians to order medically unnecessary orthotic braces for Medicare beneficiaries. Twenty-three others were charged in the $1.2 billion scam. Source: Becker’s Hospital Review

This month in the archives: In September five years ago, the Foundation published, “The Mother of All Slush Funds.” It noted, “Supporters of constitutional freedoms, individual rights, personal responsibility and greater self-reliance need to send Congress and the president back to the drawing board to return to the core health issues: solving cost, quality and access problems.”

YouTube: Did you miss the August event featuring Hans von Spakovsky on election integrity? View it and other Foundation events on our YouTube channel here.

FRIDAY FACTS is made possible by the generosity of the Georgia Public Policy Foundation’s donors. If you enjoy the FRIDAY FACTS, please consider making a tax-deductible contribution to help advance our important mission by clicking here. Visit our website at www.georgiapolicy.org. Join The Forum at https://forum.georgiapolicy.org/.