“Dependence begets subservience and venality, suffocates the germ of virtue, and prepares fit tools for the designs of ambition.” – Thomas Jefferson (1781)

“What we need is a coming together, not taking advantage of a crisis or, as one politician just said, ‘Never let a crisis go to waste.’ I think that’s the worst advice for our society that we could ever have because as it comes down to it, we’re all Americans. We all love our freedom. We all love our liberty and we expect the government to do what the government can to ensure our rights are protected.” – Barry Loudermilk, U.S. Representative for Georgia 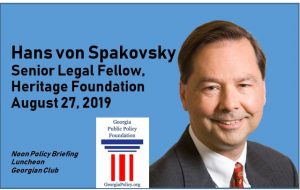 Congratulations to Dr. Jeffrey Dorfman, University of Georgia professor and Senior Fellow at the Georgia Public Policy Foundation, who has been named the State Fiscal Economist by Gov. Brian Kemp. Dorfman is author of the Foundation’s Issue Analysis on education scholarship accounts (ESAs), published in January. Among his new responsibilities: Develop forecasts based on the state’s tax revenue and manage the development of fiscal impact estimates of tax-related legislative proposals.

Data breaches: With 3,800 data breaches reported in the first six months of 2019 – 54% more than the same period last year – it’s on track to be the worst year on record for data breaches, according to a report by Risk Based Security. Through June 30, more than 4.1 billion records were exposed; three breaches were among the 10 largest breaches of all time.

Proactive: Governor Brian Kemp has ordered twice-yearly cybersecurity training for state employees. “Clearly, state agencies are being targeted,” Kemp said. “We’ve got to be more aggressive in defending against that.” The directive comes after three state agencies were hit by ransomware attacks in the past six weeks. Source: WSB-TV

Far from the tree: “Gene silencing” has reduced the amount of polyphenol oxidase – the enzyme that causes browning in apples – to create a biotech, non-browning Arctic apple that has a 28-day shelf life, for use in the food service industry. The standard shelf life of an apple is 18-21 days. Source: Bio Smartbrief

Kerfuffle over K12 charter: The 74Million website chronicles a dispute between Georgia Cyber Academy and its operator, K12, as the online public charter school worked to part ways with K12. The Georgia Charter Schools Association issued a news release supporting “the right and responsibility of charter school governing boards to make changes regarding vendors and service providers,” and encouraging both parties to work “to minimize disruption for children and families and maximize student achievement and success.” GCA had more than 14,000 students enrolled in 2018.

More than change, reform: “Closing a traditional pension plan to new workers has yet to fix pension-funding problems in several states where it’s been tried,” reports the National Institute on Retirement Security. “Responsible funding of pension plans is key to managing legacy costs associated with these plans. The experience of these states shows that changing benefits for future hires does not address an existing funding shortfall.” Source: NJSpotlight.com

Poor idea: A study by the National Bureau of Economic Research finds that in several Medicaid-expansion states, most people who gained coverage have enrolled in Medicaid regardless of their income. “In practice, ObamaCare has turned Medicaid into an entitlement program for the middle class,” The Wall Street Journal reports.

In hot water: Legionnaires’ Disease cases jumped more than fivefold annually from 2000 to 2017, with as many as 70,000 Americans succumbing to the waterborne disease every year. The outbreaks are caused by bacteria that can thrive in buildings with large water systems; nearly 70 people were believed infected recently at an Atlanta hotel. A new report urges minimum settings for water heaters of 140 degrees (131 degrees at the faucet) and prohibiting low-flow systems in hospitals and nursing homes. “Green buildings have exacerbated problems,” the report notes.

Foundation in the media: The Atlanta Journal-Constitution quoted Kyle Wingfield in an article about the dispute between Georgia Cyber Academy online charter school and its operator. The Albany Herald cited the Foundation in an article on architectural ordinances.

This month in the archives: In August 15 years ago, the Foundation published, “Playing Favorites on Land Use Won’t Solve Congestion.” It noted, “When congestion woes are solved with transportation solutions, the region can turn its attention to the growing market for a diversity of development. Then, a market able to function on a level playing field that accommodates the needs of a diverse population with diverse needs will encourage the kind of healthy competition that produces affordable, accessible housing options.”