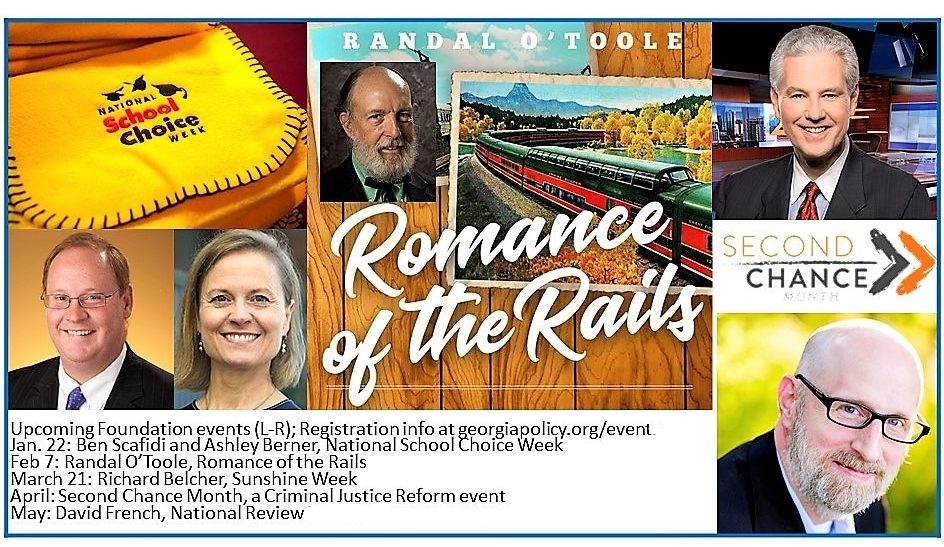 February 7: Register for “Romance of the Rails,” a Policy Briefing Luncheon with Randal O’Toole of the Cato Institute on Thursday, February 7, at The Metropolitan Club in Alpharetta. $35. Information and registration here.

“In the end it is going to be a battle of images. One image is of people trying to cross the border illegally, throwing rocks, a few engaging in criminal activity; the other image is of 800,000 suffering federal employees going without paychecks. Which side will win is less important than what is best for America. If only more politicians cared about that higher goal.” – Cal Thomas

“Originally I had a dim view of the ride-hailing concept and equated it to disruptive jitneys early last century. … I now see it as a somewhat affordable, high-quality, demand-responsive service for the 99 percenters and most importantly for those who don’t have access to a car, for whatever reason. For many … the service-affordability-ease-of-use characteristics are so much better than the public transit alternative that their quality of life has been substantially improved. These personal-revenue-generation opportunities so substantially alleviate pressures on public assistance that the public sector should certainly be tolerating, if not praising, but in no way should be taxing these mechanisms.” – Alain Kornhauser

Increases: The IRS has unveiled the 2019 cost-of-living increases for certain items. Its Revenue Procedure 2018-57 announced a $50 increase for annualhealth care flexible spending account (FSA) contribution limits, to $2,700; a $5 increase in the monthly limit for transit and parking, to $265; and increases in the annual maximum reimbursement for a qualified small employer health reimbursement arrangement (up $100 for individuals to $5,150 and up $200 for family coverage, to $10,450). The contribution limit for 2019 health savings accounts (HSAs) was announced in 2018: $3,500 for individuals and $7,000 for families. Source: Alegeus

Now hiring: U.S. News & World Report unveiled its list of the best jobs for 2019 this week, and health care jobs ranked high on the organization’s Best Jobs rankings. Occupations in health care continue to show promise due to a combination of high salaries and low unemployment rates, taking 44 of the 100 Best Jobs and most of the Best-Paying Jobs.

Prescription for change: CVS Health is “already rolling out” new health programs and services after closing its roughly $70 billion acquisition of Aetna Nov. 28, according to a report in Forbes. These include specialized services for Aetna members with cardiovascular disease and piloting a readmission prevention program. The program would schedule MinuteClinic follow-ups within 14 days of discharge when patients are unable to see a physician.

Good news: Cancer death rates have steadily declined for years, according to the American Cancer Society. Since 1991, deaths from cancer have decreased by 27 percent, which amounts to 2.6 million fewer Americans dying of cancer.

Interstate report: Bob Poole of the Reason Foundation comments on the 649-page, “long-awaited” Transportation Research Board report mapping the future of the Interstate Highway System. “To its credit, the report does recommend removing the 1956 federal ban on tolls on the Interstates. And it mentions the need, in coming decades, for electric vehicle charging stations ‘on’ the Interstates, but never faces up to the federal ban on commercial services being provided at Interstate rest areas.”

Role models: The Foundation has long advocated work requirements for able-bodied adults receiving welfare assistance. A Harvard study finds it benefits children, too. According to David Pendered, writing in the Saporta Report, the study looked at the lack of upward mobility in metro Atlanta’s children and found the suspected cause of is “not proximity to jobs; it’s children seeing adults go to work.”

Shutdown: The partial federal government shutdown entered Day 21 today, with many of the 800,000 federal workers affected facing prospects of no paycheck while Democrats and President Trump face off over his demand for $5.7 billion in funding for a proposed border wall. Citizens Against Government Waste released a list of “wasteful” individual projects Democrats approved that have cost more; NBC News released a “doomsday scenario” list. While federal employees can expect to get paid – eventually – there’s no back pay for federal contractors, CBS notes.

Here today, gone tomorrow: The internet evolution is astonishingly rapid. Just six of the top 20 internet giants in 1998 are still there today; due to consolidation, they make up just three of the new top 20, according to the Visual Capitalist.

Foundation in the news: The Atlanta Journal-Constitution quoted Kyle Wingfield in an article on health care policy in the 2019 Legislature. The Albany Herald published Benita Dodd’s commentary about the late Bob Hanner and civility under the Gold Dome.

This month in the archives: In January 15 years ago, the Foundation published, “Permit Transfers Hold Water for Georgia.” It noted, “We argue that water permit transfers could diversify economic opportunity in agriculture-heavy South Georgia; redirect growth from North Georgia, location of the state’s fragile headwaters; make water available to more users in fully allocated areas – and do all that while promoting greater water efficiency and environmental protections by enhancing in-stream flows.”