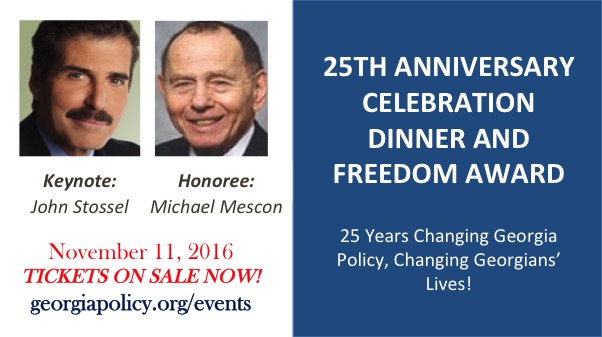 “One of the few bright spots for black children in American ghettos have been some charter schools that have educated these children to levels equal to, and in some cases better than, those in affluent suburbs. You might think that this would be welcomed by those who are so ready to do “favors” for blacks. But you would be dead wrong. Democrats who have been in charge of most cities with sizable black populations, for decades, are on record opposing the spread of charter schools. So is the NAACP.” – Thomas Sowell

“Freedom of speech and the processes of democratic elections are awesome blessings of freedom – and burdens of responsibility. Words matter!’’ – Harry Edwards

“You know who isn’t fighting against this [Opportunity School District constitutional amendment]? Parents of 68,000 students stuck in failing schools!” – Scott Johnson, Georgia State Board of Education

Then and now: In 1991, when the Foundation was established, the Atlanta Braves became the first team in the National League to go from last place one year to first place the next. Sunday is the team’s last game at Turner Field; after 20 seasons, the Braves are moving move to the new SunTrust Park in Cobb County in 2017. The team is back in last place in the National League.

Driving change: One challenge for the trucking industry is how to make productive use of trucks when safety regulations sideline drivers. Overdrive trucking magazine cites predictions that autonomous tractor-trailers will revolutionize the industry even more than deregulation did in the 1980s, improving safety, cutting costs and alleviating driver shortages.

Out of a job: Robotics are expected to change the construction industry “The adoption of robotics and other new technologies could give parts of the economy a radical boost, as economists and politicians have sought ways to boost productivity, which is key to increasing wages and prosperity,” according to an article in Britain’s Telegraph newspaper.

Shrinking options: After UnitedHealthcare, Aetna and Cigna pulled out of the insurance marketplace in Georgia in the past few months, Georgians in northeast or northwest Georgia have just two insurance carriers to choose from. In 96 counties – two-thirds of the state – Blue Cross and Blue Shield of Georgia are the only options.

CON: Georgia is one of 35 states (and the District of Columbia) with certificate-of-need (CON) laws. Health care provid­ers planning to offer or expand certain services must prove the commu­nity “needs” that service. A Mercatus Center review of 19 academic studies found CON laws have largely failed to rein in costs and “are associated with both higher per unit costs and higher expenditures.” Another Mercatus paper found that, “in states where CON laws regulate provider entry into health care markets, incumbents tend to provide lower-quality services.”

Your children pay: Local property tax exemptions for the elderly have skyrocketed over the past 40 years. About 85 percent of Georgia’s population live in a jurisdiction with some age-related exemption, according to a new study. “These exemptions can have a substantial effect on tax revenues,” the study notes. “For example, Cobb County School District’s generous tax exemption amounts to 6.6 percent of the district’s annual budget, equivalent to an annual subsidy of $290 from each younger homeowner in the county.” Source: Georgia State University

Price-gouging: Shutdown of a leaking petroleum pipeline caused gasoline shortages recently. Repairs are under way, and prices and supplies are slowly returning to normal. University of Georgia economics professor Jeffrey Dorfman warns against anti-price gouging laws in a Forbes column: “Unfortunately, every economist would tell politicians that while some people will benefit from anti-price gouging laws, other people will suffer because of them.”

Regulating free speech: Voters in several states will vote on ballot measures allegedly aimed at reducing “big money” and “outside influence” in local elections. The real goal is to limit the ability of nonprofits (like ours) to weigh in on policy matters we care about, according to an op-ed in The Wall Street Journal by Tracie Sharp and Darcy Olsen that points out, “This is an infringement of our First Amendment rights.”

Workforce training: Atlanta taxpayers, the Chick-fil-A Foundation and The Coca-Cola Foundation will contribute more than $7 million to the City of Refuge nonprofit for job training programs and economic development on Atlanta’s Westside. The city of Atlanta is pledging $1.25 million, including funds from Invest Atlanta, the city’s economic development arm. The nonprofit will teach job skills for careers in auto tech, retail, the culinary arts, landscaping, security services and HVAC installation and repair. Source: Metro Atlanta CEO

Crime stats: The FBI has released its crime report for 2015, showing a 3.1 percent overall increase in violent crime. The Foundation’s Ross Coker puts the report in perspective, pointing out, “Violent crime has fallen steadily for decades now.”

This month in the archives: In September five years ago the Foundation published, “Tough on Crime, Smart on Criminal Justice Spending.” It noted, “Georgia’s corrections system has benefited enormously from the limited use of drug courts and day reporting centers. But there is still much to be done when it comes to criminal justice reform.” Fortunately, Georgia continues to do more!

The Forum: In her latest, “Checking Up On Health,” Benita Dodd discusses breast cancer, why Medicaid expansion is a bad idea and why acne may be good for you.

Foundation in the news: The Marietta Daily Journal quoted Benita Dodd in a Sunday editorial on government and consulting contracts.