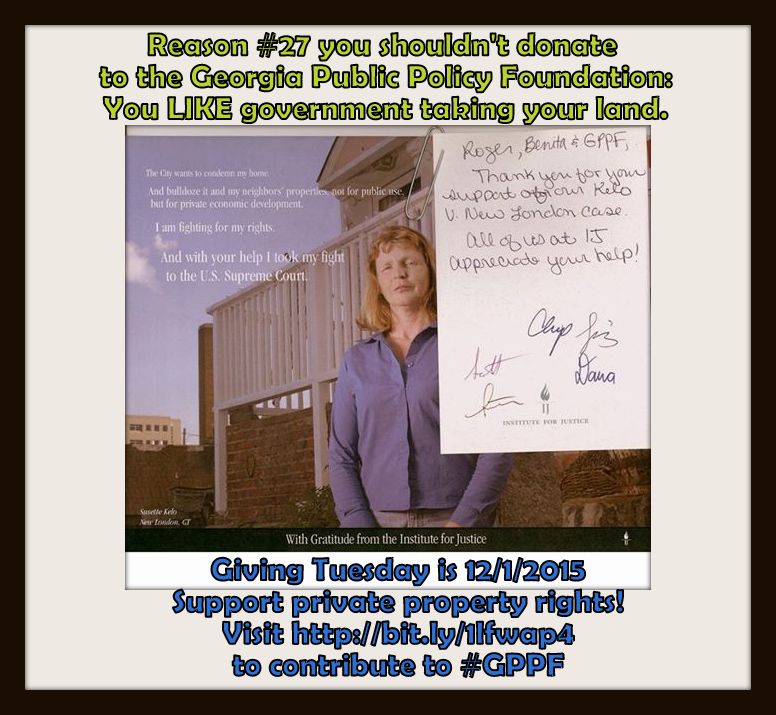 Giving Tuesday is December 1. Follow daily on our Facebook page as we count down the reasons you should not contribute to the Georgia Public Policy Foundation!

“I have the wallet rule: If you go out on Friday night with your wallet, then the following Friday with my wallet, [on] which Friday night will you have more fun? The problem with government is that it’s always someone else’s wallet, and the Friday night party never ends.” – Seton Motley

“The same prudence which in private life would forbid our paying our own money for unexplained projects, forbids it in the dispensation of the public moneys.” – Thomas Jefferson, 1808

[S]chools do not exist to provide jobs for teachers or ‘fairness’ to institutions, but to provide education for students.” – Thomas Sowell

“Make no mistake: This is a carbon pollution rule in name only. While its proposed goal is to reduce U.S. CO2 emissions in hopes that the world will follow, when implemented it will in effect change the DNA of the U.S. power sector – arguably the most envied and most reliable power generation system in the world. This is analogous to changing the currency of an economy in order to address a recession.” – David GattieEvents

December 8: Register to attend, “The Case for K-12 Student-Based Budgeting in Georgia,” a summit and luncheon hosted featuring experts from the Reason Foundation and Allovue.10:30-1:30 p.m. at The Gallery, Cobb Galleria Centre. $30. Registration and information here.

Detached from social engineering: In 2014, detached houses represented 82.4 percent of owned U.S. housing, up from the 80.6 percent registered in the 2000 census. “The increase may be surprising, given the efforts of planners to steer people into higher density housing, especially apartments,” notes Wendell Cox in Newgeography.com.

We’re No. 5: Thumbtack’s Small Business Sentiment Survey released this week found that small-business owners in Georgia ranked No. 5 in the nation for their feelings about current and future economic conditions, giving Georgia 65.63 on a 100-point scale. Southern states dominated the economic outlook rankings in October; Oklahoma, Texas, and Florida all joined Georgia in the top five.

We’re No. 1: For the third year in a row, Site Selection magazine ranks Georgia the No. 1 state to do business. It said the state “clearly has in place the business-attraction attributes most required by companies expanding and establishing new facilities.”

Transportation woes: For the second year in a row, transportation topped metro Atlanta’s list of concerns, with 27 percent of survey respondents finding it the biggest problem facing the Atlanta region, according to the Atlanta Regional Commission. Crime was second and the economy was third.

Up, up and away: Despite President Obama’s promise, made at least 19 separate times, to lower annual insurance premiums by $2,500, a new study by HealthPocket.com finds average premiums for middle-tier ObamaCare exchange “silver plans” are increasing by roughly 10 percent in 2016. The average deductible is set to increase by 6 percent, to $3,117. “Bronze plans” are set to rise by 11 percent for nonsubsidized customers compared to 2015 prices; deductibles for those plans now average a stunning $5,731.

On life support: Writing in National Review, Kevin Williamson points out there were supposed to be 21 million people enrolled in ACA programs in 2016 but, “the Obama administration currently predicts that the actual number will be somewhat less than half of that. … We all knew that was coming, just as we knew that people would respond to the very strong incentives not to buy insurance by not buying insurance.”

This month in the archives: In November 1995, the Foundation published, “Let’s Return Real Fiscal Authority to the States.” It noted, “A balanced budget amendment is also something we could do now. We must start tying the hands of the federal government. If we don’t do that, much of this discussion – of what we should do at the state and local level – is simply going to be wasted effort. I’m not against interim reforms, but it’s just not going to be as successful as returning real fiscal authority to the state and local level.”

The Forum: In “Checking Up On Health,” Benita Dodd writes on the failure of the co-ops of the Affordable Care Act, the increase in prescription drug use and research on a dog virus becoming man’s best friend. In “Halloween, ‘Sugar’ and The Right to Try,” Benita writes about why terminally ill Georgians should be able to try experimental drugs. Also read a Capital Research Center report on why the push for disclosure of donors is a bad idea for free speech.