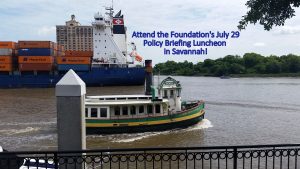 Join us in Savannah on July 29! Just 10 days to the registration deadline (July 27) for the Georgia Public Policy Foundation’s annual Friedman Legacy for Freedom Day event, noon at Vic’s on the River in Savannah. This Policy Briefing Luncheon is keynoted by Dr. Ben Scafidi, Georgia’s foremost expert on education funding, and is sponsored by the Friedman Foundation and the Georgia Charter Schools Association. $30. Find out more and register here.

“The central disappointment of the Obama administration is that he campaigned on unity and optimism but governed on division and pessimism. We will not flourish if conservatives respond in kind, and make this a contest between dueling pessimisms.” – Arthur Brooks

“When the day arrives that a woman’s image adorns Federal Reserve currency for the first time, it might well be that of Harriet Tubman. … It may, however, be a dubious honor to appear on something that declines so regularly in value. Without a doubt, this woman would impart more esteem to the bill than the bill to her. Her value is far more solid and enduring.” – Lawrence W. Reed

“That’s the fundamental flaw in the anti-GMO movement. It only pretends to inform you. When you push past its dogmas and examine the evidence, you realize that the movement’s fixation on genetic engineering has been an enormous mistake. The principles it claims to stand for – environmental protection, public health, community agriculture – are better served by considering the facts of each case than by treating GMOs, categorically, as a proxy for all that’s wrong with the world. That’s the truth, in all its messy complexity. Too bad it won’t fit on a label.” – William Saletan

Transparency: Governments will be required to report their unfunded pension liability on the face of their Fiscal Year 2015 balance sheets. This will provide citizens with better transparency of their governments’ debt. The unfunded retirees’ health care liability, however, will remain hidden off the governments’ balance sheets. Read the Foundation’s Issue Analysis, “A Case for Changing Public Retirement Benefits in Georgia.”

Affordable? More than 300,000 taxpayers overpaid the Individual Shared Responsibility Payment (individual mandate) for health insurance on their tax returns processed through the end of April, according to the National Taxpayer Advocate. Most taxpayers use paid tax preparers, meaning most would probably spend more than the roughly $110 average overpayment amount in preparer fees if amended returns are required. Source: Accounting Today

Don’t thread on me: The Texas Supreme Court has rejected licensing requirements for eyebrow threaders. The state’s cosmetology license requires 750 hours of training at a state-approved school – at a cost of thousands of dollars – plus two licensing exams. “Not a minute of the training or a single question on the exams was devoted to eyebrow threading,” notes the Institute for Justice, which represented several eyebrow threaders and business owners.

This month in the archives: In July 1995, the Foundation published, “Taxpayers’ New Worry: Your Money or Your Land.” It noted: “To borrow a term, government has ‘sprawled:’ into new areas, new agencies and new services. ‘Vital’ programs have been expanded or added to the list of ‘core’ services provided by government.”

Better than beach reading, try some beach watching: “Love Gov,“ a series by the Independent Institute; “Do you know Clarence Thomas?”  And how do you follow “I, Pencil?” With “I, Whiskey,” of course.

Foundation in the media: Benita Dodd’s commentary on civil asset forfeiture was published by The Rome New-Tribune and Dalton Daily News.

Visit www.georgiapolicy.org to read our latest commentary, “The Dignity of Work,” by Kelly McCutchen.