A reduction in the underlying cost of health insurance is an often-overlooked benefit of a U.S. Supreme Court decision in favor of the plaintiff in the King v. Burwell case.

Regulation of insurance has traditionally been reserved for state government. The Affordable Care Act (ACA) imposed a slew of federal regulations, however, that have resulted in higher premiums. These higher premiums have been hidden somewhat by the generous subsidies available on the exchanges.

Just how much did the ACA increase premiums? The Manhattan Institue published a study this year designed to answer that question.

The Manhattan Institute collected pre- and post-ACA insurance rates for the most populous ZIP code in every county in the nation. They looked at premiums for 27-, 40- and 64-year old male and female non-smokers, and adjusted the rates to take into account “those who are denied health insurance coverage as well as those who receive a surcharge.” The resulting ObamaCare Impact Map shows the results.

The chart below shows the results for Georgia. (For simplicity, we have averaged the premiums for males and females in each age category.) 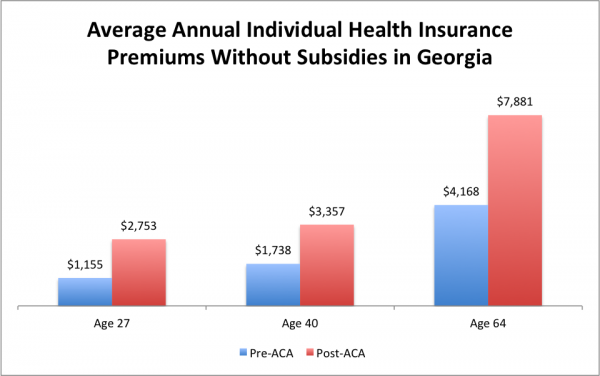 This shows Georgians could save anywhere from $1,598 to $3,713 a year, depending on age, if the ACA regulations were repealed. In some cases these cost reductions would offset the loss of subsidies. The savings in high-cost areas like Albany, Ga., (Dougherty County) are even greater. The table below shows that Dougherty residents, who are already paying some of the highest rates in the nation, could save several thousand dollars.

How do these rates compare to subsidies being proposed by Congressional Republicans?

Here is an overview of the major proposals:

Tax credits are phased out between 200 percent to 300 percent of the Federal Poverty Line.