The great majority of Georgians get their insurance from government or their employer. As of 2014, only 6 percent of Georgians held an individual policy or a policy bought on the federally operated exchange. 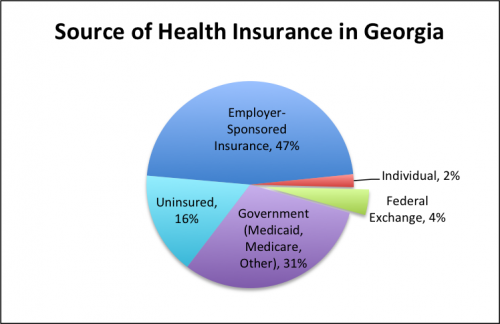 Most of the media attention surrounding the upcoming U.S. Supreme court decision in King v. Burwell has focused on the Affordable Care Act’s subsidies in the federally operated exchanges.

Individuals with incomes between 100 and 400 percent of the Federal Poverty Line are currently eligible for tax credits that lower the cost of insurance. The average subsidy on Georgia’s exchange, which is federally operated, is $3,288 per year per person.

If the Supreme Court rules in favor of King, it would be illegal to issue tax credits to individuals on the federally operated exchanges, leaving Congress and President Obama to develop a bipartisan solution.

Many people do not realize that these ACA subsidies are not unique: Almost all health care is subsidized.

For example, the Kaiser Family Foundation estimates that individuals who are uninsured full-time for a year use an average of $2,443 of health care, paying an average of $500 out-of-pocket, but leaving $1,942 per year per person that must be subsidized. The majority of these government subsidies go to hospitals, which are required to treat patients regardless of their ability to pay.

Thanks to special treatment in the federal tax code, those who have access to employer-sponsored insurance receive an average subsidy of $2,021 per family per year. Because this tax benefit is based upon our progressive federal income tax, the benefits are not evenly distributed. There also are small tax benefits for people who are self-employed and for people with high medical costs

This means the great majority of the population already receives government-funded insurance or benefiting from significant government subsidies, but in a convoluted way that distorts the market.

A more simple approach has been proposed for years by John Goodman and others. Goodman explains the idea:

[O]ffer every American a tax credit for health insurance ― in and out of the exchange, at work or away from work. If people turn down the offer and choose to be uninsured, the unclaimed credit would go to safety net institutions in the communities where they live.

When uninsured patients enter hospitals, they would be expected to pay their bills. But if they cannot, unclaimed credit funds would be available to pay for the care.

Under this approach, money follows people. The government would guarantee a certain amount of money for every person. If people choose private insurance, the subsidy would help pay premiums. If people elect to be uninsured, the money would go to the safety net.

Real universal coverage is simple and uncomplicated. It’s the halfway measures that are incredibly complex and that leave victims in their wake.

The Georgia Public Policy Foundation has proposed a similar approach as an alternative to Medicaid Expansion in Georgia. Perhaps the Supreme Court decision will provide the needed impetus..