The City Commission of St. Augustine, Fla., voted 4-1 Monday night in favor of proposed commuter rail service between St. Augustine and Jacksonville, Fla. According to a presentation by the Jacksonville Transit Authority, the federal government (i.e., you and I) would most likely be willing to fund half of the project. The Jacksonville-St. Augustine leg is estimated to cost $171.7 million. The state, county and city would have to provide the rest.

Casting the lone dissenting vote, Commissioner Donald Crichlow said the cost would be more than he was willing to absorb. “I just don’t think that’s where I want to put my tax dollars,” he said, according to the St. Augustine Record.

Is this project a worthwhile use of taxpayer dollars? I reached out to my trusty Facebook friends:
“Who can tell me what’s the drive time between St. Augustine and Jacksonville, Fla.?”

That said, most responded that it’s a 45-minute trip, with a low of 30 minutes and a high of an hour. Just to be sure, I Googled it, too. Wiki.answers.com’s response: 52 minutes. In other words, trip time is not a problem.

Here are some numbers gleaned from the final report for the proposed commuter rail service. Bear in mind the report is from 2009. 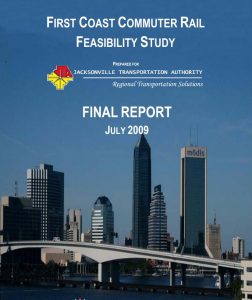 Let’s not even dispute any of these numbers. We’ll work with the 2009 cost estimates but mention this caveat: According to a World Bank Policy Research paper, and a whole litany of rail projects, “For rail, average cost overrun is 44.7 percent measured in constant prices.”

The 38-mile line is projected to cost $171.7 million and draw an astonishing 4,814 riders daily. For reference, Seattle’s Sounder commuter rail’s 35-mile North Line, in operation since 2003 between Seattle and Everett, reports weekday boardings of 1,100 (2010).

This line’s capital costs would be equal to $45,637 per rider, according to the final report. I didn’t drill into those numbers. No matter how you look at it, $45,637 is a lot of money.You could pay me that to stay home!

What problem would commuter rail solve? The travel time is 51 minutes on a route where the car ride averages 45 minutes. Would commuters give up their cars to board a train that takes at least as long as the car trip – not including the time to get to the train station and to their jobs? Would St. Augustine and Jacksonville taxpayers want to subsidize this service to take maybe 2,500 vehicles off a route that isn’t congested anyway?  Should the federal government be using our tax dollars to encourage such money pits? What happens to bus service that is really needed when the transit authority discovers rail budget shortfalls?

Perhaps the trip time isn’t everything. Perhaps it’s the comfort and the desire to have someone else do the driving. In that case, why doesn’t the region start with an express bus service to establish the ridership then graduate to commuter rail if the market and the need are proven? That’s been done elsewhere and is a far more cost-effective solution.

I agree with St. Augustine Commissioner Donald Crichlow. All things considered, I just don’t think that commuter rail is where I’d want to put my tax dollars, either.