Medicaid is a beast.  About one-in-five Georgians receives Medicaid health care.  That is 1.7 million people.  Fifty-nine percent of statewide births are Medicaid babies.  Another couple hundred thousand children are enrolled in PeachCare, the state children’s health insurance program.   Medicaid could grow by hundreds of thousands more if the U.S. Supreme Court upholds the federal health care reform law in its decision expected next month.

Not at all surprisingly, Medicaid redesign questions were abundant when three of Governor Nathan Deal’s advisors met with Georgia Children’s Advocacy Network members at the Freight Depot in Atlanta.  The advisors made no presentations and took questions for almost 90 minutes.

Next month the U.S. Supreme Court will rule on a constitutionality challenge filed against the 2010 federal health care reform law.  If upheld, the Patient Protection and Affordable Care Act provisions often known as ObamaCare could eventually add 620,000 new Medicaid patients to the state program.  Rogers predicted, “People who haven’t had access to services are going to seek services probably very quickly.” 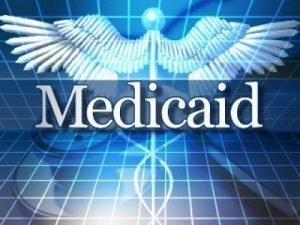 Georgia Medicaid cost $7.78 billion in fiscal year 2010, according to Kaiser State Health Facts.  Federal funds pay 66% and the state is responsible for the rest, about $2.7 billion.  Georgia Medicaid program redesign is being managed by the Department of Community Health with private partner assistance from Navigant.  The project is described in a comprehensive design strategy report available on the DCH Medicaid website.

This project is so important to Georgia’s health care community that it is being closely monitored by many organizations outside government.  Cindy Zeldin is executive director at Georgians for a Healthy Future which advocates for improved statewide access to quality health care.

“The three buckets when we look at improving Medicaid would be one, just coverage, getting kids who are eligible but who are not enrolled today into the program so they at least have that front door access,” Zeldin told the Public Policy Foundation this week.

“Second, improving access to care, just making sure there is a mechanism to make sure that being in Medicaid means you can see a provider if you need to,” Zeldin said.  For instance, the state has no OB-GYN practitioners in 39 counties, which is an impediment to women’s health.

“Third would be improving outcomes and accountability, what you are asking managed care companies to report on and making sure you are measuring outcomes that ensure quality care.”

The Supreme Court opinion expected next month will also decide whether Georgia must create a health insurance exchange.  Last December a state report to Governor Deal said a private or quasi-governmental exchange would be preferable to one imposed by the federal government, but Georgia would prefer that it is not required to create any exchange.  Georgia opposes the federal health care reform law and it joined the suit that challenges the constitutionality.

“If the law is upheld as it stands now we will work very quickly to implement a state exchange,” Rogers said.  “If the law is not upheld the discussion will begin again on whether or not to move forward with a state exchange.  Part of the concern is without the individual mandate would people want to buy insurance through the exchange?”

Education and several public safety issues were also discussed during the open forum.

“The voucher conversation isn’t on the table for us,” Bernhard said.  “We’re more interested in increasing the quality of public education for all students everywhere.”  On compulsory school attendance she said, “The evidence is not necessarily compelling that raising the age of mandatory school attendance automatically results in an increased graduation rate.”

Also, Georgia admits that it has too many high school graduates who require remedial courses when they enter college.  “We know that students are graduating from high school not ready for college,” Bernhard told 100 Georgia Children’s Advocacy Network members.  Part of this discussion is how those students can be assisted by resources inside the state technical college system.

This week the Illinois Senate President proposed that his state quickly enact internet gaming legislation to get in front of a potential federal law that would grandfather existing state programs but prevent other states from creating new ones.  Do not expect anything like that in Georgia.

It is well documented that the lottery-funded HOPE scholarship, grant and pre-K programs can no longer afford to fully fund their commitments.  Governor Deal opposes a proposed casino-style project and Bernhard says, “What we’re looking at is what we can do to boost the existing revenue streams.”

Several folks applauded when public safety advisor Thomas Worthy said, “I have no doubt that we will probably see and definitely sign a juvenile code rewrite next year.”  HB 641 in this year’s legislature was a substantial effort to rewrite piecemeal juvenile laws that are decades old.  It passed the House but then was stopped before Senate consideration so more work could be done on cost.

“Everybody is in agreement on the policy side of things,” Worthy said.  “We are there.  The stakeholders are there.  Agencies are now there.  Now what we are tasked with doing is figuring out a way to not only pay for implementation but actually ascertain savings that will come under the bill.”  Worthy said consultation has begun with the Pew Center on the States; Pew assisted with criminal justice reform legislation that Governor Deal signed this month.

Worthy also acknowledged, “Not only do we have a horrible child trafficking problem within our state, (Interstate) 75 is used to move folks going to other states.”  This year HR 1151 in the General Assembly created a commission to study child trafficking and make recommendations.