The Georgia school choice story sometimes appears to need new faces and voices other than the usual suspects – politicians, teachers, charter school leaders and, yes, even policy folks who continue to push the pedal for increased school choice options.

Many new faces and voices tell their stories in a terrific film that will premiere Thursday evening at the Cobb Galleria Centre with remote showings at locations statewide.  “Making the Grade in Georgia: Educational Freedom and Justice for All” packs a lot into one half-hour.  Regardless of where you stand on school choice, this film should be watched because it educates.

Public admission to Thursday’s Cobb Galleria Centre premiere is free.  The Making the Grade in Georgia website has details about live streaming locations scheduled in Albany, Ellijay, Rome and Atlanta.  The film was commissioned by Americans for Prosperity Foundation – Georgia. 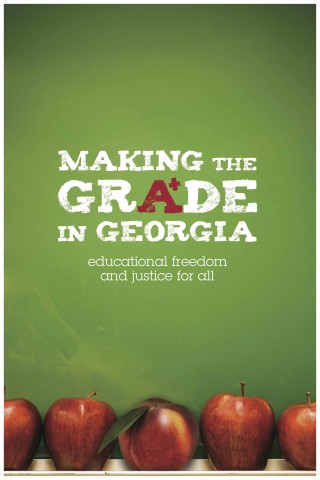 Much is at stake in the Georgia school choice movement.  Last spring the state Supreme Court overturned the charter schools commission.  Governor Nathan Deal approved a $10.9 million rescue that enabled several existing schools to open this year.  The future of Georgia charter schools authorization will be back before the General Assembly starting next week.

Now about new faces and voices in Making the Grade:  You will meet Jewel Faison, executive director at A School for Children in Albany.  “We provide multi-age, non-graded learning environments for children between the ages of seven to 17.  That means we get back to the one-room school house where everybody is important and every need is met,” says Faison.

You will meet Perry Everson, a student at Pataula Charter Academy in Edison.  “We get to do this hands-on learning.  You just don’t sit there and copy all these things out of your textbook and memorize all these notes.  You get to go and actually do it.  It’s really helped me learn a lot more because you get to do it and once you do it, it really sticks in your brain.”

You will meet Kim Whipple, mother of eight.  Two are in college, one attends private school and five attend Georgia Cyber Academy.  “For those people who want to home school but don’t feel quite comfortable in doing that on their own… this is a perfect option,” Whipple says.

You will meet Morgan Giesler.  The young singer has a website, five songs on iTunes; she recently recorded in Nashville and Morgan will be in Los Angeles this month to pursue her acting and singing.  Morgan is a hybrid school pupil; she studies at home and in a supervised setting.

“If you have a kid who is not having to go to the theater, doing singing, dancing, all this stuff, if they enjoy their public school and they like it, I think they should go there,” says Morgan.  “But if they don’t enjoy it and they are doing other things I think that is when you should move them.”  Her proud mother, Dina Giesler, says Morgan “is thriving.”

By some estimates, 1.5 million adult Georgians do not have a high school diploma.  More than 60,000 high school seniors failed to graduate on-time in 2010.  Our statewide high school graduation rate, about 65 percent on-time, puts Georgia in the bottom five of all 50 states.

“Our education system, I’m going to put it in my vernacular, is jacked up from the floor up.  It’s broken,” says Melvin Everson, chairman of Georgia’s EEOC.  “I support my public schools but we have to come to the realization, one size doesn’t fit all.  Home school, private school, public school, charter school; whatever it takes to educate this workforce, we better do it.”

The film says about three-in-ten Georgia students in lower grades achieve basic proficiency in reading and math.  “The impact of this is that the societal divide widens between the haves and the have nots,” says Jerri Nims Rooker, director at the Center for an Educated Georgia.

Major players who support school choice are present.  “The challenges are enormous but we have to win this issue,” says Senate Majority Leader Chip Rogers. “If we’re going to be competitive economically we’ve got to improve all schools,” says Georgia Public Policy Foundation president Kelly McCutchen.  “That’s why we believe in school choice.”

Making the Grade begins with the premise that school choice is good for Georgia and it stays on the point.  The film acknowledges Georgia public education progress in many sectors – special needs and tax credits scholarships, and the increased use of technology everywhere in learning – but it equally makes the point that not everyone has the same access.

AFP – Georgia plans to make DVDs of Making the Grade available statewide.  Discussions are underway that could result in television broadcasts.  Thursday evening’s Cobb Galleria Centre and satellite viewing locations are open to the public.  The movie will also be streamed onto the documentary website at www.makingthegrademovie.com